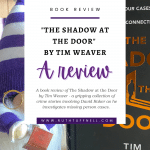 My latest read is a book I’ve been super keen to get my hands on from the moment Tim announced it was coming! I love Tim’s books and the David Raker stories are gripping. I dragged my children all over town trying to track down The Shadow at the Door and eventually had to order online but it was well worth the hassle.

THE GRIPPING, BRAND-NEW COLLECTION FROM THE SUNDAY TIMES BESTSELLING AUTHOR – DAVID RAKER IS BACK . . .

It’s a night just like any other in the Conister home – but then Paul heads upstairs and never comes back.

When his wife Maggie goes to see where he is, she can’t find him. His phone and wallet are by the bed. The windows are locked from the inside.

Missing persons investigator David Raker is an expert in locating the lost. So when he’s hired by Maggie, he knows that in every disappearance – however impossible it seems – there’s an answer.

What he doesn’t know yet is that his search for Paul Conister will become linked to three other mysteries . . .

A night patrolman on the London Underground makes a deadly discovery.
A cold case is reopened – but the key witness appears to no longer exist.
And thousands of miles away, a random shooting may not be random at all.

David Raker is key to unlocking the truth . . .

The Shadow at the Door is a bit of an anomaly — in some ways it’s part of the David Raker series of missing person novels but equally, it’s not. In the introduction, Tim explains his reasons for writing this “four stories, one connection” book. And the idea really works.

If you’ve not read any of the David Raker series before, don’t let that put you off as The Shadow at the Door definitely works as a standalone book. For those who have read one or all of the previous books, this further expands your David Raker knowledge. If you’re not familiar with the central character of David Raker, Tim himself wrote an excellent piece on the website Dead Good which introduces David Raker and gives you a good understanding of the character. You can read that article by clicking here.

The storylines in The Shadow at the Door are, as any Tim Weaver fan would expect, exceptionally clever. The idea that someone can go missing inside their own home grips you from the off, and the way that story is told is remarkable. As a reader, you are hooked instantly and are reeled in deeper and deeper as the book goes on.

I did feel that story two came to too abrupt an end but I had faith that there was a reason for that and I wasn’t disappointed. The stories were so intricately woven that once you reached the conclusion of the entire book, you were satisfied on each of the cases that were described throughout.

My only complaint with Tim’s books is that I get so engrossed that I hate it when I get to the end. It’s like, “oh, is that it? I want more.” I’m already excited for the next full length David Raker novel, which is due next year.

PLEASE NOTE: Any link marked [AFF] is an affiliate link. If you click through and then make a purchase, I will earn a (very) small commission at absolutely no additional cost to you.

About Tim Weaver (Bio from Amazon)

Tim Weaver is the Sunday Times bestselling author of eleven thrillers, including No One Home and You Were Gone. He has been nominated for a National Book Award, twice selected for the Richard and Judy Book Club, and shortlisted for the Ian Fleming Steel Dagger Award. He is also the host and producer of the chart-topping Missing podcast, which features experts in the field discussing missing persons investigations from every angle. A former journalist and magazine editor, he lives near Bath with his wife and daughter.

This site uses Akismet to reduce spam. Learn how your comment data is processed.

On the blog today is a new book review featuring @

On the blog today is a review of “The Shadow at

I totally forgot to post yesterday - how bad is th

Yesterday, my little friend came to keep me compan

Hello everyone! I hope you’re having a good Mond