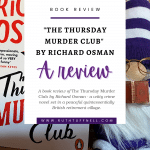 The Thursday Murder Club by Richard Osman was one of those books that everyone in the book world seemed to be talking about for quite a while. I’d had it on my list of books to get hold of for what seemed like an age before I actually purchased it. I was however, really looking forward to reading it.

In a peaceful retirement village, four unlikely friends meet up once a week to investigate unsolved murders.

But when a brutal killing takes place on their very doorstep, the Thursday Murder Club find themselves in the middle of their first live case.

Elizabeth, Joyce, Ibrahim and Ron might be pushing eighty but they still have a few tricks up their sleeves.

Can our unorthodox but brilliant gang catch the killer before it’s too late?

I really didn’t know what to expect from Richard Osman’s first novel, but I was pleasantly surprised. The main characters were genuine and likeable. I warmed to all of the residents, and could just imagine the little group of friends gossiping and enjoying their secret meetings. Each character had their own little quirks and they all had genuine back stories which included grief, loss, medical issues, physical decline and loneliness. Each story helped to understand each character and their place within the group.

I think the only downside of the book for me was that the story was told from multiple perspectives, which was sometimes difficult to keep up with. I don’t think we needed quite so many points of view as it did, at times, make the story a little confusing. However, for me, this was only a minor point once I’d got my head round who was who.

The story played out well with all the requisite twists and turns you’d expect from a crime novel. The plot is clever and came to a believable conclusion. The whole story however was underscored with wit and humour that made it a very easy and enjoyable read. Many crime novels are intense, dark and grisly, so it makes a refreshing change to read such an entertaining and almost delightful murder story.

What’s not to love about this book? Really nothing. It’s fun, clever, witty and an entertaining read if you want a crime novel that isn’t full of bloodshed, gore and continual darkness. I’d definitely recommend it and am looking forward to reading the follow up in future.

PLEASE NOTE: Any link marked [AFF] is an affiliate link. If you click through and then make a purchase, I will earn a (very) small commission at absolutely no additional cost to you.

About Author (Bio from Amazon)

Richard Osman is an author, producer and television presenter. The Thursday Murder Club is his first novel. He is well known for TV shows including Pointless and Richard Osman’s House of Games. As the creative director of Endemol UK, Richard has worked as an executive producer on numerous shows including Deal Or No Deal and 8 Out of 10 Cats. He is also a regular on panel and game shows such as Have I Got News For You, Would I Lie To You and Taskmaster.

This site uses Akismet to reduce spam. Learn how your comment data is processed.