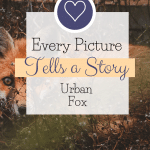 Last week, we started a new theme for the inspirational image writing prompts, being “iconically British”. Today’s image shows one of Britain’s most iconic mammals, the fox. Seen both in rural communities and in urban areas, the fox is a rarely seen but well known species of the UK. This beauty is photographed snuggled on train tracks.

“Goodbye,” said the fox. “Here is my secret. It is very simple. It is only with the heart that one can see clearly. What is essential is invisible to the eye.”

Do you know the story of The Little Prince (also known as The Fox’s Secret?). If you do, use that story and the image as inspiration for your own story. If you don’t, I suggest one day you read it, but in the meantime, tell me the story of the fox in the image. Where is he from? Where and how does he live? Is he alone? Is he a scavenger? What is his tale of survival in the wild?

Tell me your story the comments – I might feature some on my blog!

Hello. Today’s been a bit of a scorcher in this

Hello. How’s the first half of your week gone?

Hello. How’re you doing today? Do you agree with

Hello everyone! How’ve you all been doing? I’m

Hello. How’s this for a fabulous quote? I love g

Hello! How’s everyone doing? I’ve had a bit of

Hello. It’s been another wet day here today but

Hello. I seem to be very late in posting today. Be

Hello. I’ve had a bit of a day so have been out