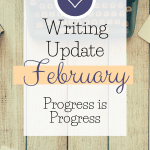 I never planned to do an update every month. I wasn’t sure my writing would be interesting enough to do that, especially as I journal daily as it is. I am amazed at just how fast the months seem to spin around and how soon I have to do another update. I do however, find that these monthly updates help to me to keep on the straight and narrow, and are a great aid in tracking my progress.

When I wrote last month’s update, the word I chose to use for the state of play at the time was “stalled.” I am very pleased that this month there has been a bit of a turnaround. Whilst, the few days that followed the January update have a big fat zero in the word count tracker, the following week, I managed to turn a corner.

I started slowly but aimed to be more consistent, writing 5 days out of the 7 in the week following the last update. In February, that has increased, and I’ve had a few really good writing days and have tried to at least do a small amount every day. I have however, had a couple of exceptionally good days where I’ve written over 1000 words, and one supersonic day which was my best ever. That day I not only knocked out over 2300 words but also surpassed the 40,000 mark.

A few days after the last update, I reached Day 200 of my journey and posted an update in my journal of how days 100-200 had gone. This also included the result of my self-set mini-challenge to write at least 100 words every day for 100 days. You can read that post (and find out the challenge facts and figures here).

This past week, I hit a big plot point issue where I basically wrote myself into a corner. If you’ve kept up with past updates or the daily journal, you’ll know that I didn’t meticulously plan every chapter and scene of the story but have instead being winging it. It’s been working and I have really enjoyed the flexibility of the story writing itself. It’s going places I never expected it to go. However, sometimes, that leaves me in a quandary.

In this particular instance, I had changed the manner in which a character comes into contact with a building and the story of said building. The property has a key role in the story and in writing on the fly, I’d changed the plot to make this more interesting. However, this meant that I’d written myself into a sticky plot situation. In the end I wrote in capital letters across the middle of the page “what is the building’s story?” and couldn’t write any more until I knew. Trouble was, I didn’t have a clue.

I spent a considerable amount of time doing a lot of research to try and figure out the backstory for the building – when it was built, who built it, what its history was, and how it wound up in the possession and state it is in when my main character falls in love with it. Even after doing lots of reading and research and writing a potential backstory, I still wasn’t sure. Instead I wrote into the manuscript a list of potential storylines and all of sudden from nowhere it all came to me. Phew.

However, this drew me to another plot issue …

After solving the issue of the building, I needed to sort out the back story of the current owner of the property. This led to my total word count one day last week being four. Yes, you read that right. Four.

I had got to the point where the main character and the property owner were to meet for the first time and the building’s story was to be revealed. I wrote “They met in the …” and then realised I didn’t know enough to carry on. So instead of writing, I had to spend another day working on the character’s story. I knew some of their backstory but then their timeline broke and I didn’t know how or where they’d ended up. Another day of research meant I solved my problem but ran out of time to write, so had to record four as the total day’s word count. Fortunately, the following day was the day I wrote over 2300 words.

I am hoping that I can continue in similar vein as, for the time being, I know where the story is going.

In order to keep with the format of these updates, as of first thing this morning, the total word count stands at 42.022, which is an increase of 10,769 words since last month. I am actually really pleased with that. Let’s hope I can keep that going now.

You can keep up with me on a daily basis by reading my Journal (this is now published about ten days behind real time), on my social platforms (links in the sidebar and footer) and, of course, I will publish another update next month.

Are you currently writing a novel? Let me know how you’re doing with your current WIP. I’d love to hear from other writers. Please leave a comment below on how things are going for you.

Hello. Today’s been a bit of a scorcher in this

Hello. How’s the first half of your week gone?

Hello. How’re you doing today? Do you agree with

Hello everyone! How’ve you all been doing? I’m

Hello. How’s this for a fabulous quote? I love g

Hello! How’s everyone doing? I’ve had a bit of

Hello. It’s been another wet day here today but

Hello. I seem to be very late in posting today. Be

Hello. I’ve had a bit of a day so have been out